Reality television star Brody Jenner took to Instagram several times this week while on vacation in Bali with closer-than-ever girlfriend Kaitlynn Carter. Aside from several stunning shots of lush green landscapes and wildlife, most of which he snapped on a Canon 5D camera, the former star of MTV’s “The Hills” posted a heartfelt birthday tribute to Carter which also attempted to prevent hateful comments toward her. 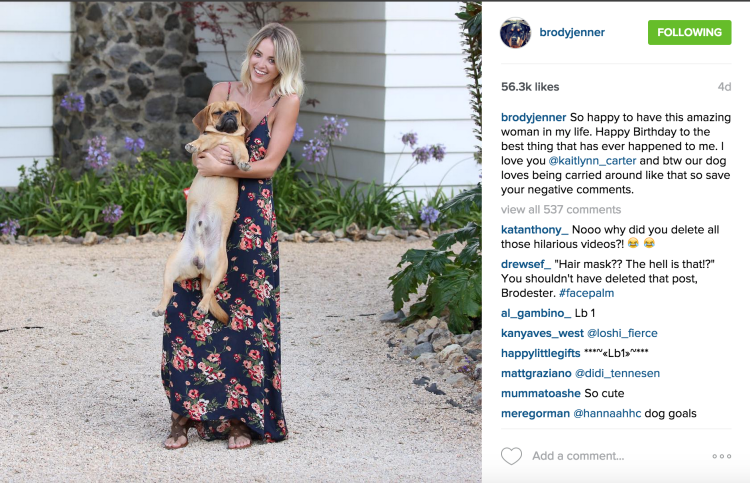 In a birthday tribute post that shows a photo of Carter holding up their dog by its belly, Jenner revealed his protective nature by taking precautions and captioning, “Our dog loves being carried around like that so save your negative comments.”

Clearly Jenner has been victim to social media bullying and intends to protect his girlfriend from the harassment. Perhaps more notably, however, are the several professions of love Jenner wrote about Carter this week.

“So happy to have this amazing woman in my life,” Jenner said. “Happy birthday to the best thing that has ever happened to me. I love you @kaitlynn_carter.”

Could wedding bells be in the near future? Could Carter’s name be changing to “Caitlynn Jenner”? (hmm…sounds familiar!) Plenty of Jenner’s followers seemed to think so!

One post by username @domesticated_diva_ reads, “Defends his queen from negative comments like whoa. Bet he proposes!”

Username @queen_bea39 encouraged the couple’s commitment by writing, “Put a ring on it Brody. You make a lovely couple.”

While rumors remain unverified, several followers expressed their congratulations. Some even tagged their friends next to emojis of wedding rings and hearts.

In addition, his most recent post of an Indonesian lanscape included a caption that reads, “Nihiwatu 9/8/2015. One of those days you will never forget.”

While it is still unsure whether the pair have agreed to say “I do”, one thing is clear: Jenner and Carter are having a wonderful time on vacation in the South Pacific. The well-documented holiday is leaving followers not only in speculation about their relationship, but also in awe of their fabulous wildlife encounters and days spent at tropical beaches. The islands of Bali and Nihiwatu may expect to see a boom in tourism – and if so, they would have Jenner (and Instagram) to thank.